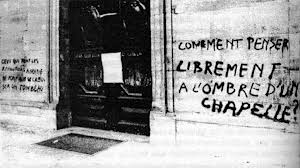 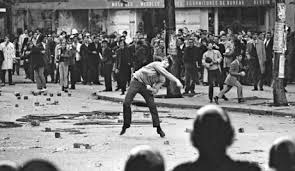 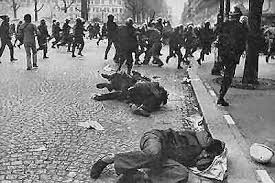 French workers have joined student protests in Paris for the first time with a one-day general strike.

About 800,000 students, teachers and workers marched through the French capital demanding the fall of the government under Charles de Gaulle and protesting at police brutality during the riots of the past few days.

May 16, 1968: Protests mount in France (This day in History, The History Channel)

France History Archive Paris May-June 1968 (Has excerpts from witnesses, newspapers etc)
Philippe Zoummeroff Collection of May 1968 (244 posters and ephemera documenting the explosion of protests that swept across France)
A documentary by Seymour Drescher, Professor in the Department of History at the University of Pittsburgh, former student of George Mosse, and author of Abolition: A History of Slavery and Antislavery. The film looks at the student and worker upheaval in France in May, 1968.